Janissarie work, body is pretty much finished except for the holster, just arms to do and a little tidying up.
Posted by Starforged at 22:21 1 comment: Links to this post

This is just some progress on my haqqislam starter set.

I started with the coolest model in the pack, being the power armoured Janissarie. I was severely tempted to paint it in the iron man colours, but I resisted. I decided on going for a very simple restricted colour scheme as I didn't want to complicate these excellent sculpts and I love the simple colour palette in certain scifi for example DICE's mirrors edge and Bethesda soft's Brink as well as the general close future parkour element. So I will be painting it in oranges, blues and browns (I really don't like green after painting an entire cadian 8th company.) So this is about 5 hours in, the armour has been base-coated and all the shadows have been put in, the left leg has had highlights, whilst the rest is lacking.

I also cannot recommend infinity enough, the sculpts are beautiful and so much better than anything I've had from GW IMO and pictures don't give them the justice they deserve. 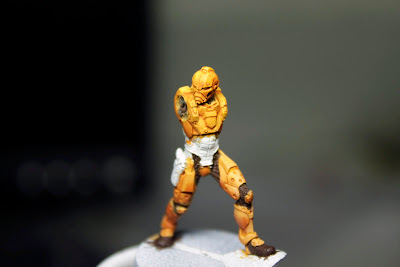 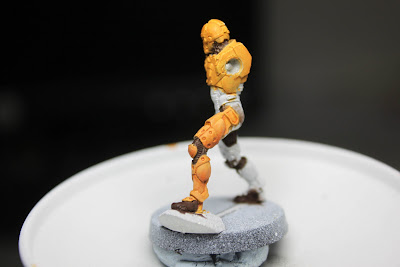 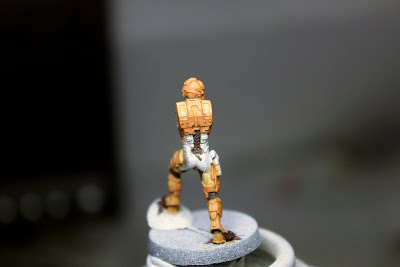 So I will continue with the rest of him tomorrow. 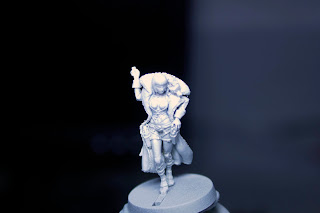 This is one of the studio mcvey Isabella models, which I was given for Xmas, I'm tempted to use as a hassassin faday, who is like a callidus assassin posing as a noble as it is 28mm true scale. Thoughts? 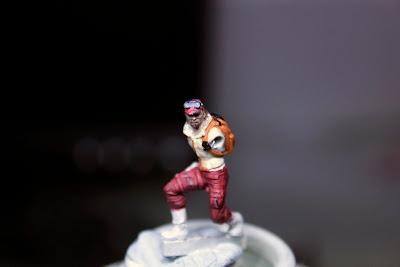 Also this was the test paint for the sniper...lets just say it got too complicated and I didn't like the finished product, so he will be stripped and repainted in the new style.


Posted by Starforged at 01:41 No comments: Links to this post

Thanks to Scarvald reminding me, I've decided to continue with this blog. I've recently been having major problems with justifying my large warhammer collection and continuing with it, I don't like games workshop, my bank account doesn't like games workshop. I also can't remain motivated to paint over 50 models just because I can (I think the grey knights will be the last large army I ever paint) I've tried ultramarines first company as well as alpha legion, both haven't re-ignited the spark of warhammer 40k and it's large armies. As well as exams, my last one is on the 27th of June, so then I will have lots of time off unless I get a job.

So now what am I doing now? I'm currently going back to what I did between 2008 and 2010, I'm on a 40k hiatus, I won't be buying any new 40k stuff nor games workshop in general. However I am getting into infinity and I have another friend who is interested too. I bought the Haqqislam starter box-set cause it looks cool and I like the units as well as I have to at max paint 20 models. So once I've located all my tools I've misplaced since this April I will be getting on with those. I'm also making a couple of fallout inspired costumes for a convention this October, if you're interested and I will be posting the progress on them up too.

Hi sorry I've been a little inconsistent with my updates over the last week, University interviews and then exam results on Saturday. I managed to get into Keele university to do Biochemistry with a minor in psychology, though I missed my preferred option of Kent university by 12 marks, so now I need to hear back from them and decide whether to retake my pesky Newtonian physics module (I suck at maths).

So that's why there has been a lack of updates.

So my first squad of legionnaires (count as legion auxilia), there's been some initial work done, but loads more to be done. There's a brilliant mix of sources here, ghosts, fw cadian upgrades, pig iron kolony militia heads, to build up a really varied squad, the downside being they don't look very cohesive, but as legionnaires it makes sense. 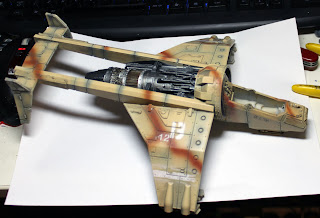 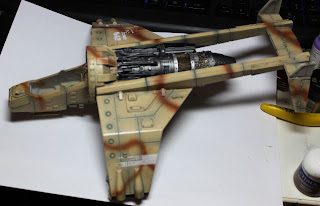 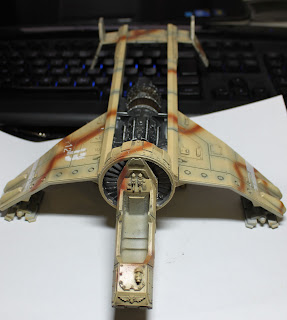 I'm quite pleased with how the vulture is coming along, as this is a navy unit that has been inducted into a guard regiment, it has different markings to the valkyrie as well as a slightly modified camo scheme. Now awaiting battle damage.


Another project that I've had in the works for ages is the space hulk box-set. 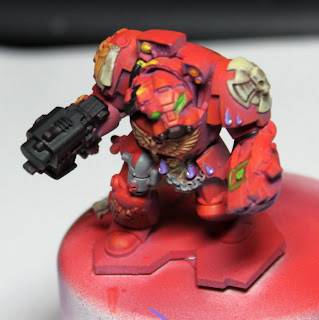 This is the "techie" terminator, don't know his name, but it's given me a nice chance to play around with some NMM and OSL effects.


@Silar Lannanaris I will endevor to send out your heads tomorrow, as said earlier I haven't had a chance to send them.


Also @ Skarvald the Trollfaced Please could you message me your address, if you do not by friday, I will redraw another name from the group.
Posted by Starforged at 00:17 1 comment: Links to this post